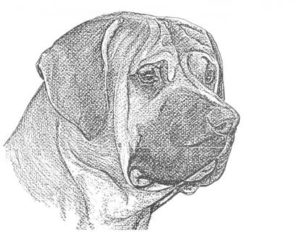 BRIEF HISTORICAL SUMMARY : Japan has a long history of dog fighting, beginning in the 14th century. With such a history in the background, this breed was produced as a hybrid of Shikoku-ken and Western breeds. Named after the area where they were bred, these dogs are sometimes called «Japanese Mastiffs». The Western dogs used for creating the breed were Bulldogs (1872), Mastiffs (1874), German Pointers (1876) and Great Danes (1924), all of which were used to improve the breed by sequential mating. According to some accounts, St.Bernards and Bull Terriers were also involved, but it is not known in what years they were used. The Tosa’s established features of stamina and the fighting instinct typically found in Mastiffs may be attributed to the involvement of such breeds.

GENERAL APPEARANCE : Large-sized dog with a stately manner and robust build. The dog has hanging ears, short hair, a square muzzle and hanging tail thick at the root.

BEHAVIOUR/TEMPERAMENT : The temperament is marked by patience, composure, boldness and courage.

NECK : Muscular, with a dewlap.

TAIL : Thick at the root, tapering towards the tip, reaching the hocks when let down.

FAULTS : Any departure from the foregoing points should be considered as a fault and the seriousness with which the fault should be regarded should be in exact proportion to its degree and its effect upon the health and welfare of the dog. •Thin bone. •Snipy muzzle. •Slightly overshot or undershot bite.

•Male animals should have two apparently normal testicles fully descended into the scrotum.
•Only functionally and clinically healthy dogs, with breed typical conformation should be used for breeding.